Nmédia's 20th anniversary Our story from the year 2000 until now

In 2020, Nmédia turns 20. Already 20 years have passed since the famous Y2K bug that kept everyone talking at the time 😂. It's crazy how quickly time flies! Over the years, our team has grown, and our expertise has evolved. We celebrated victories, big and small, tripped sometimes and got back up to overcome obstacles that made us grow into who we are today.We had inspiring meetings and established strong partnerships. These are all the events that built our identity and our values making us proud and unique. When we stop to think about it, we have a lot to tell. Discover our history throughout 5 themes that are filled with Nmédian-flavoured anecdotes!

Thématiques
Physical evolution
Enlargements, moves, development of expertise, obstacles we've overcome and more
Human evolution
Parties, activities, arrival of new Nmédians and lots of funny stories
Social involvement
Scholarships, donations, volunteering and supporting causes and events that are dear to our hearts
Recognition
Awards received and important clients whom we would like to thank for their role in our continued evolution
Technology
The technology and evolution that have marked our development
See our timeline
Share
Facebook LinkedIn Twitter Email 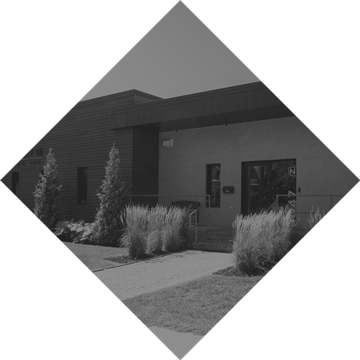 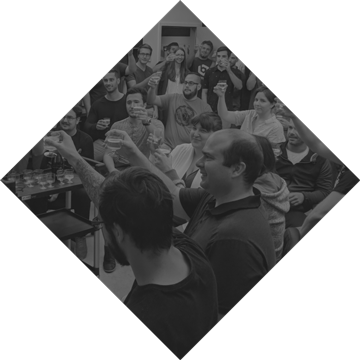 Nmédia Solutions, our name at the time proposed by Carl Savoie, was founded by Bernard Robitaille. In the early 2000s, the idea was struck from the shared willingness of Drummond Info Plus (led by Bernard Robitaille) and the agency Tac.Tic Savoie Baril Inc. (founded by Louis‑Philippe Baril and Carl Savoie) to make the most of the web and digital bubble to have a strong presence across the board in marketing and digital printing. Thus it was, that by combining the efforts of this terrific team with allies such as Groupe Signet Plus (founded by Steve Patenaude), Pascal Genest (Tabasko) and the late Pierre Toutant (who already had a few years of web experience under his belt), that Nmédia was born.

Incidentally, our first offices were those of Drummond Info Plus located on Saint-Joseph Boulevard in Drummondville.

This is truly where it all began: our first contracts and the official start of our activities. At the time, Flash websites were all the rage. Obviously, our website was no exception. 😉

Our business got rolling quickly! Among our first projects, we worked on the client portal for St‑Hubert Rotisseries (thank you, the late Pierre Toutant!) and the websites of the Centre local de développement Les Maskoutains and Armotec. Can you believe that at the time, a site cost around $1,800 and could be completed in about a month?! 😱

People who are important to us

People who are important to us

To get the Nmédia machine rolling and bring in projects, we had to rely on many allies from the get-go:
2001

After just one year of operations, it was already time for our first move! Our offices moved from Saint-Joseph Boulevard to William Street... just a few steps away.

Innovation is in the air

Innovation is in the air

We had the idea to create our own CMS (Altitude) to design our website projects without using a major CMS of the time, such as Websphere.

Sounds like a big mission, you think? At Nmédia, we thrive on challenges, and you will see that it didn't take long before we got moving!

Our ascension in the web world continued with clients such as Veranda Jardin, Canada Worldbest Group, Serico and Underworld Skateshop.

As promised, the wheels were rolling, as we say! In 2002, two colleagues began developing our CMS Altitude in Classic ASP. Just to show how promising this was, the Underworld Skateshop boutique in Montreal purchased the creation of an online boutique with Altitude 2 before one line of code was even written!
2003

A change of ownership is in the air

A change of ownership is in the air

Louis‑Philippe already held the title of General Manager on a consultant basis for Nmédia Solutions when he had the idea to buy the business from Bernard Robitaille, who was the owner at the time. He saw Nmédia's true potential and couldn't let it slip by.

At Nmédia, we have created websites for many diverse sectors of activity. In the goal of creating a website for traumatology specialists and for the entire medical community within the francophone world, we launched traumaquebec.com (French only).

3 years in business and already a third office! What do you want? When you start to expand, you need more space. We moved from William Street to Janelle Street, mostly because our server room was already located on the building's second floor. It was just more convenient that way.

An important project in Altitude 2

An important project in Altitude 2

Groupe Lambert is one of our first clients to have a website in our CMS Altitude and still remains active with projects in 2020.
2004

In February 2004, Bernard Robitaille accepted Louis‑Philippe's purchase offer. The transaction was completed before the attorney Gilles Lafrenière (today a judge at the Cour du Québec), a long-time Nmédia partner. This was made possible thanks to the Business Development Bank of Canada (BDC) and Investissement Québec.

During the transaction, Steve Patenaude also became an Nmédia shareholder. He and Louis‑Philippe have known each other since the age of 4, having played hockey together.

To efficiently manage our projects and the time dedicated by Nmédians, we created our own time and project management system that we named Interventions.

Among our projects underway, we were working actively on the mock-ups for a new website for Coffre-fort Déziel inc.

In 2004, we were a small team. So little that the first Christmas party was held in Louis‑Philippe's kitchen. A small group, but lots of fun, we promise you!

Major contracts on the horizon

Major contracts on the horizon

One of our first major clients was, without a doubt, RONA. We owe these projects to Isabelle Richard who discovered us in a common way at the time... in the Yellow Pages, paper version! Our first project with them was for the RONA cycling team website. Since beginning our partnership with RONA, we have delivered around 75 projects and continue to work together in 2020.

Patrick D'Astous of D'Astous Groupe Conseil began helping us with tax credits in 2004. We are lucky to still count on him in 2020.
2005

In 2005, La Toile du Québec was THE directory of Quebec websites to check online when looking for something. Our website was just listed in the Website Design category.

During the Business Meetings event as part of the international convention "TransAl 2005, aluminum in transformation", we created a website as well as a new Altitude module to allow online participant registration for this networking activity. The Altitude module automatically created a schedule of targeted meetings for participants based on various criteria of their choice.

This is what the computer wallpaper looked like on our screens in 2005!

In 2005, we began our biggest project in terms of transactional websites for EuropAuto. The mission allowed us to create a novel online car reservation tool that was very user-friendly.
2006

Google and its surprising algorithm

Google and its surprising algorithm

By the end of 2005, we had developed an Altitude website for the CHUM oncological gynecology services.

Google sometimes had various surprises in store for us with its algorithm to classify websites in searches. When we searched for "oncological gynecology services" on Google, Nmédia website came up first in the search results because of our press release that we published concerning the CHUM mandate. And if we searched for "oncological gynecology services CHUM", we came up 3rd in the Google results!

What could be better than getting out of work at noon on Friday to enjoy the beautiful weather? The summer schedule was already a nice tradition. In addition, Louis‑Philippe invited (and still invites) Nmédians to a party at his house with BBQ, pool and activities to celebrate summer as a gang.

A new function in Altitude 2

A new function in Altitude 2

With Altitude 2, it was no longer necessary to have programming experience to add a form on his website. We created an innovative tool that was quick and simple, allowing Altitude 2 users to create personalized forms easily.

Arrival of an Nmédian who is now a director

Arrival of an Nmédian who is now a director

When Stéphane Lépine arrived from Collège Multihexa, diploma in hand, he was the only one who could update our CMS. It took him 1-4 hours every week. In 2020, it takes about 20 seconds and is done automatically with the click of a button. Stéphane is still an Nmédian today and now holds the title of Systems, Network & ALM Director.

Thanks to our accountants and notary

Thanks to our accountants and notary

When we have a business, it is crucial to be guided by trustworthy accountants and notaries. We would like to thank JLB & Associés and our notary Annie Durocher, who has been at our side since 2006.
2007

The culture at the heart of our involvement

The culture at the heart of our involvement

Culture has always been a big part of Nmédia. For as many people as possible to take advantage of the event Mondial des Cultures de Drummondville, in 2007, Louis‑Philippe invited Nmédians to a day on the festival site followed by supper at a restaurant.

Creation of a new department

Creation of a new department

Our team continued to expand. With the addition of several IT experts, we created our application development department. This required a little office reconfiguration!

Among the rookies of the year, we find Vincent Beaulieu, Mélanie Gosselin and Patrick Bélanger, who are still members of the Nmédia team in 2020.

For Patrick, his first day at the office took place on the Saint-François River wakeboarding. 🏄‍♂ That's pretty cool when your onboarding day falls right on the activity for closing the summer schedule in a fitting way!

Later, Patrick became one of Nmédia's three shareholders, and today he is Vice President of Development, Technology and Innovation.

As the team grew larger and larger, a group insurance plan was put in place. Nmédia pays 50% of the premium cost for each Nmédian and their family.
2008

From intern to director

From intern to director

At Nmédia, we trust our interns. And Éric Sylvestre learned that firsthand! When he began his internship, we entrusted him with a major project in collaboration with his intern colleague, Miguel Bernard: a web pricing tool VR TARIF for Leclerc Assurances. It was a beautiful project that won an award in 2010. In 2020, Éric is still an Nmédian and holds the title of Director of Application Development (French only).

To make our website more quickly accessible, we migrated our SQL database by switching from SQL 2000 to SQL 2005.

We had many soccer fans and also a really nice team jersey!

A summer outing among colleagues

A summer outing among colleagues

Work is great, but sometimes, you just have to have fun! So, the entire team got together and attended the show AO La fantastique Légende in a VIP box. At the time, Louis‑Philippe was also president of the Légendes fantastiques corporation.
2009

April Fool's prank of the century

April Fool's prank of the century

We decided to play a good prank on a colleague for April Fool's Day. At the time, we were actively seeking business partners to encourage an internet supplier to invest in our neighbourhood to develop a fibre optic network.

This colleague had made an agreement with Nmédia: if he succeeded in bringing fibre optic to our offices, he would receive a bonus to cover the fine he had received in March.